What: Pairing recycling bins with trash receptacles throughout the building, gas station, and store entrances.

Why: To do their part in using resources efficiently and reducing waste.

How: Obtained Anoka County’s Business Recycling Grant to get free bins and signs, while also training their staff to effectively use these bins.

Results: Diverting an estimated 51,000 pounds of material annually that was previously destined for the landfill or waste-to-energy.

In early 2016, Coborn’s Superstore in Ramsey met with the MN Waste Wise Foundation to determine if there were opportunities to utilize Anoka County’s Business Recycling Grant. Even though Coborn’s was already doing a good job by recycling much of their food waste in a “Food to Hogs” recycling program, and offering guests a place to recycle plastic bags, they knew there were still more opportunities to recycle and reduce overall waste. 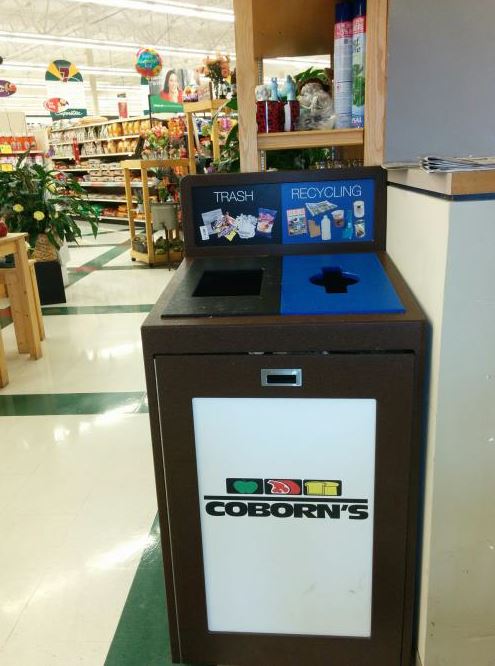 Following Waste Wise recommendations, Coborn’s was able to obtain a grant from Anoka County to provide new color coded bins throughout their building to encourage guests and employees to recycle cans, bottles, containers, paper, and cardboard whenever possible. Coborn’s added blue recycling bins in deli areas, outfitted their gas station with exterior recycling bins, and even provided their guests with dual recycling and trash receptacles in the café area. Once the bins were in place and signs had been applied, Coborn’s Superstore gathered their team together for a recycling training led by MN Waste Wise.

“It was pretty painless,” said Store Director Vicki Wredberg. “Waste Wise helped get our employees on board and everyone seems to understand what they were doing.”

With all the recycling basics in place the great results came relatively easily. “We are now having our dumpster pulled less frequently, and since it doesn’t have as many bulky plastics, it is heavier when it does get pulled,” said Wredberg. Coborn’s dumpster is now being hauled every 120 days as opposed to every 40 days before their recycling improvements. They’re hoping to pay less for waste and recycling services as a result, since trash is taxed at 17% while recycling is not taxed!

Coborn’s continues to improve on their recycling activities and Wredberg thinks the guests like it as well. “Some guests have noticed that we’re recycling more, and they think it is a good thing,” she said. Coborn’s improvements in collection capabilities, bin labeling, and employee education have resulted in an estimated 51,000 pounds of material being recycled previously destined either for the landfill or waste-to-energy outlets.