Welcome to the 2022 Construction Weekly!

The Construction Weekly is published weekly during the construction season and includes details about current construction projects happening throughout Anoka County. Check back weekly for updated construction information or, if you are interested in email notifications of the updates, subscribe by using Notify Me.

Our Passion is Your Safe Way Home 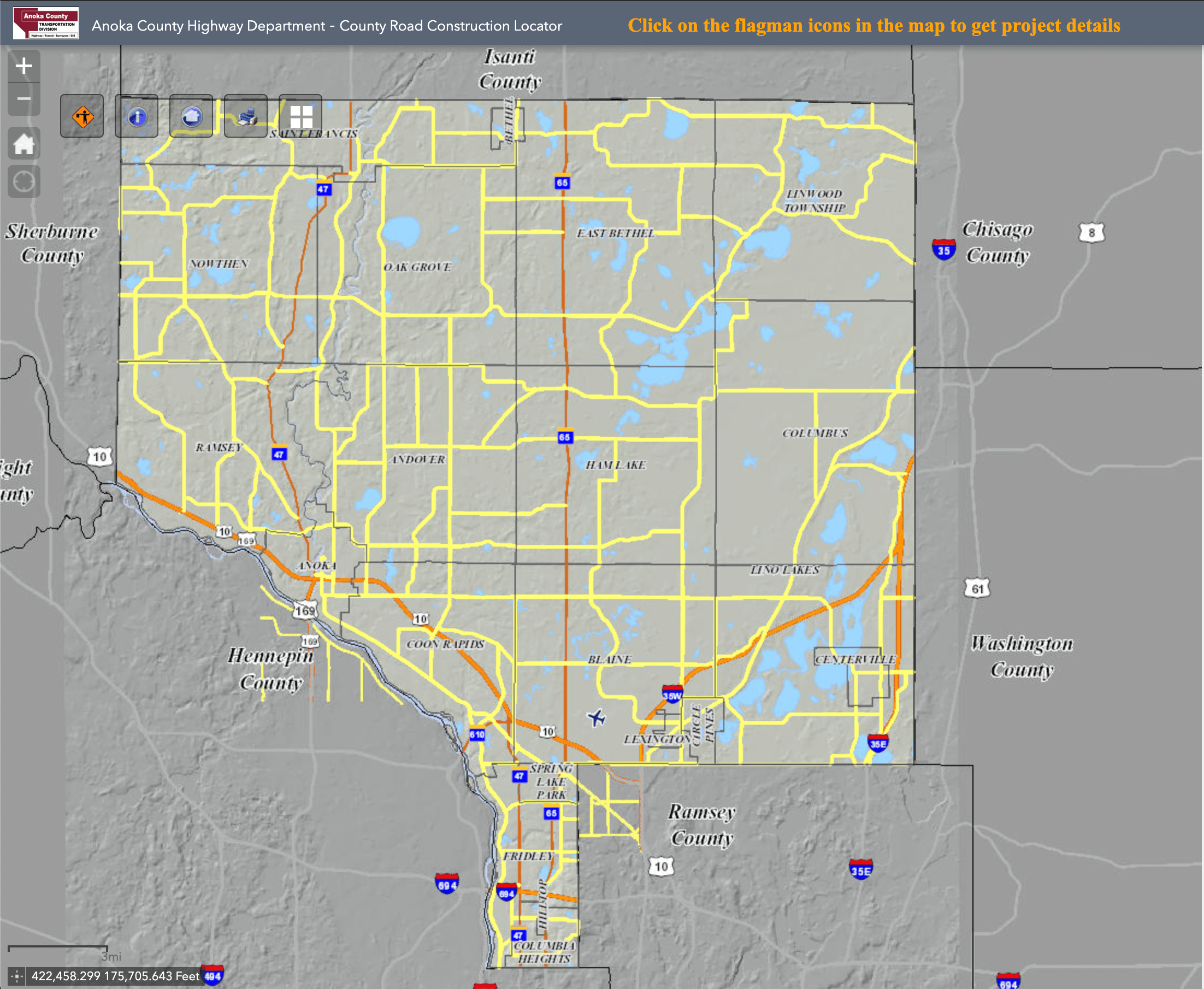 Project improvements include reconstruction of Foley Boulevard, from a 4-lane undivided roadway to a 4-lane divided roadway with turn lanes and multi-use trail, with an overpass at the Burlington Northern Santa Fe (BNSF) Railroad tracks. The project will improve public safety and reduce traffic congestion on CSAH 11 by constructing the bridge over the BNSF railway.  This project is scheduled to be completed by October 2022.

Update for the Week Ending August 19:
The grading contractor worked on placing topsoil along the north side of Foley Blvd, in preparation for turf restoration, and completed the excavation of two drainage ponds along Norway Street and installed a geomembrane liner in both of them.  The electrical contractor worked on installing wiring for the new signal system at East River Road and the new Foley Blvd, which is scheduled to be put into operation next week.  The paving contractor completed temporary paving in the Metro Transit Bus Facility, in preparation for the next stage of construction.

Work scheduled for the week ending August 26:
A traffic switch is scheduled for Monday August 22; the switch will begin two-way traffic on the westbound lanes of Foley Blvd, continuing over the new bridge. Traffic on East River Road will be split to the outside lanes of northbound and southbound traffic. Coon Rapids Blvd will be reduced to one lane, northbound and southbound for median work. The grading contractor is scheduled to begin removal of the eastbound lanes of Foley Blvd and start to build the proposed eastbound lanes from Coon Rapids Blvd to the new bridge.

This project proposes to expand the existing 2-lane roadway to a 4-lane divided roadway. Other project elements include installation of a storm drainage system, ADA enhancements, a multi-use trail, traffic signal system improvements, and other associated improvements.

Work scheduled for the week ending August 26:
Next week, the contractor will continue rough grading operations throughout the project and install class 5 gravel behind the storm sewer crews.  Storm sewer crews will continue to install structures on the westbound lanes from Legacy Creek Parkway to Lexington Avenue.

Update for the Week Ending August 19:
This project is complete with minor punch list items to finish.

No New Update:
This project is scheduled to start on September 6, weather permitting.

Work Scheduled for the Week Ending August 26:    The contractor is scheduled to remove the existing bituminous surface at the intersection of Lexington Avenue & Lake Drive on Tuesday morning and remove the top 2” of bituminous from North Road to 112th Avenue and install new bituminous pavement throughout the project by the end of the week.

Update for the Week Ending August 19:
This project is complete with minor punch list items to finish.

No New Update:
This project is scheduled to start on September 19, weather permitting.

No New Update:
This project is scheduled to start on September 9, weather permitting.

No New Update:
This project is scheduled to start on October 3, weather permitting.

No New Update:
This project is scheduled to start on October 17, weather permitting.

Update for the Week Ending August 19:
The contractor completed the removal of the existing shoulder, installed metal reinforcements, and has completed half of the new concrete lane.  This project has been delayed due to weather this week but is scheduled to be complete by August 31st.

At the Anoka County Highway Department, it is our vision to enhance and protect life by providing safe roads and eliminating traffic congestion.

Our Passion is Your Safe Way Home.